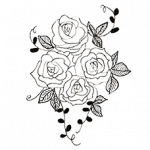 A Bouquet of Flowers from God 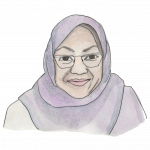 I was 21 years old. I was a student in Mechanical Engineering in Sharif University of Technology in Tehran, the capital city of Iran and I was in love.

Yes, I was 21 when I fell in love with my professor.

He studied Electrical Engineering. I was in the math class he lectured named Numerical Analysis.

After almost six months of struggling to get approval from my parents, they were convinced. Or in better words, they gave up.

He had absolutely no flaws. Not with his personality, job, family, appearance, nothing. He wasn’t that tall and he was handsome with black big eyes and black stylish hair. He had a good sense of humor which made him and his classes adorable. He was a skilled teacher, but not strict. He was trustworthy, caring, and kind.

He had served in the war between Iraq and Iran and became ill from the chemical weapons used against Iranian soldiers. He was one of many victims.

I knew that, yet still I couldn’t help myself. There is no cure for love.

I loved him and accepted him with all those things, even though they would hurt us in future. I didn’t want to think about them.

We got engaged. I was walking on clouds with the biggest smile on my face. I had everything I wanted. We were the happiest in the world.

Two weeks after the engagement, he was hospitalized for his illness. I said nothing to my family. I saw no need to cause them worry.

I went to visit him in the hospital on a sunny, hot day in early May. On my way there, I stopped by a flower shop to buy a bouquet of flowers. Even in the dim light of the shop, I could see flowers hanging from the walls and ceiling—beautiful baskets everywhere. I looked around and carefully picked a purple iris and two bunches of white and yellow freesia.

When the shop owner was making the bouquet, I noticed that I didn’t have enough money. I got nervous. I started to sweat. I prepared an apology in my head to say to the man, leave the flowers there.

While I was busy trying to think of the least embarrassing way to say I don’t have enough money, he said, these flowers are expensive, but because these two bunches are the last ones, I will give you a discount.

I let out a small sigh of relief in my head, but I still was worried. I only hoped I had enough.

After a few minutes, he made a beautiful bouquet. I calculated in my head: those two bunches of freesia cost twice the money I had. Plus the iris, I was absolutely sure that it wouldn’t be enough. Oh my God. What should I do now? How could I tell the man that I don’t have enough money with me? I had ordered a bouquet and I had to pay for it anyway.

He handed me the finished bouquet. The purple iris sat in the middle, surrounded by a circle of white freesia and then a circle of yellow, wrapped in a purple paper, with a white ribbon. It was stunning.

After all the frustrating thoughts and nervous sweating, I asked the price.

To my surprise, he told me: 1,500 tomans, the currency of my country of origin, which was exactly how much I had with me then.

I let out a big sigh for real. I paid the money, hugged the bouquet, and left the flower shop happily.

Everybody in the street stared at me and the flowers. It looked like a bouquet for brides.

When I got to the hospital to my spouse’s room, he was sleeping. After a few minutes, he woke up and smiled. I laid a gentle kiss on his forehead. I whispered a piece of a poem we loved— I kissed him and I’m not worried about ending the world anymore. I’ve got my share—and put the bouquet in his hands.

He was surprised and smiled again sweetly. He told me that he was dreaming of a bouquet of flowers which came to him from God.

He looked at the flowers and said: It was this. This is a bouquet of flowers from God.