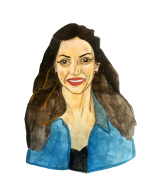 It was a dark night in the middle of summer; we were visiting our family for a holiday in the north of Iran.

We were staying at my uncle Ahmad’s house. But we had finished our games and fun for the evening. We were going to my other uncle’s house, Uncle Hojjat, to spend the rest of the night there. I reached out to my mom to walk hand in hand on the dark path; the path between the two houses.

My brother, Reza, and my cousin, Tahereh, came with us. The garden path was full of the sound of crickets. The smell of red roses and pink flowers wafted through the courtyards of some houses. The path was lit by the moonlight which made us children more calm and relaxed.

We were laughing. But Mama was worried: “Hurry! Let’s get there soon, it’s too dark!”

We were walking past the graveyard.

Reza asked: “Tahereh! Have you ever heard our Dad’s story? How he passed by this graveyard and saw a white spirit with whom he spoke?”

Tahereh sounded excited: “No! Really?! You mean Uncle Morteza saw a ghost in this graveyard?! How? When did this happen?!”

“When our Dad was only sixteen years old, he stayed up late at his friend’s house. When he was returning home, it was completely dark. He decided to try a new path to his parents’ home … the path beside this graveyard.

Dad walked very slowly. His heart was full of fear; he suddenly saw something white and cloudy right beside the graveyard.

My cousin Tahereh gasped. Reza’s words had made the garden path seem darker and longer.

“Dad was very scared, but he was also curious. It looked like the ghost was pointing to the left and to the right. It seemed to say: ‘Don’t go left! Don’t go right! Come here!’

Dad’s imagination was running wild. But he wasn’t really a fan of ghost stories, which were so popular in villages. He wanted to know the truth.

He was breathing fast and sweating.

He felt a strange coldness in his legs. He forced them to move.

The closer he got, the louder the sound of snorting and whispering;

Now our Dad was just a few steps from the white ghost. It sighed loudly and Dad jumped!

He saw that the white ghost was not really a ghost.

It was a farmer’s white horse, which had not been taken to the stable yet.

And the arm that pointed to the right and to the left?

That was the white horse’s tail; it moved side to side to swat the mosquitoes on that warm night.

After he saw it was just a horse, Dad laughed. He wiped the sweat from his forehead.

Then he walked home feeling proud. He had faced his own fear.”

Tahereh and Reza and I all laughed. Mama laughed too, but she couldn’t help saying: “Run! Run to get through the dark night and these tall trees faster!”

At last we got to Uncle Hojjat’s house. A dim light lit the wooden steps in this courtyard. I heard laughter—that of my other cousins and all the guests. I smelled sweet sliced watermelon.

There was no thought of the darkness of that night. No fear or worry at that moment.

What did I feel? What do I remember now?

It was the scent of pure night gathering all around us.

It was summer vacation at my dad’s birthplace.

I remember this all so well.