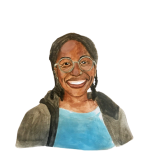 I grew up in suburbia, a patchwork of neighborhoods stitched together by malls, shopping centers, gas stations, and churches. A place in Northern Virginia valued mostly for its proximity to the city – and the people whose self-importance can be measured by each hour they sit in traffic on the Beltway. Two hours spent – both ways – barely inching along. Meanwhile, their kids spend the same two hours in motion – but still going nowhere – at the roller rink.

We line up at what was once a warehouse, five bucks in hand, waiting to be let in for the 6 o’clock session. It’s a back-to-school skate night so the line is longer than usual. The white-haired woman sits in the ticket window, checking skates and taking cash. A gum-gnawing teen standing at the door tacks on wristbands before letting anyone through to the rink.

Inside, it’s dimly lit. Pink beams from the spinning disco light weave around the galaxy pattern carpet, spotlighting shooting five-point stars, patches of gum gone black, and unrecognizable planets from outside the Milky Way. They haven’t started the music yet and the glossy rink floor is still empty.

I busy my hands, sliding the wristband on and off while I wait for my friends to come in. We’re in that perilously frantic era of middle school, deep in the throes of puberty. Whether tentative or more surefooted, we’re stepping into who we want to be. But the gap to adulthood is wider than we could ever imagine so we end up stumbling into the grownup version of ourselves. I slide off my tennis shoes, shoving them under the bench before I strap on my roller blades. I haven’t worn them since my summer fall.

There’s a hill in one of the divisions of my neighborhood. It’s steep and long enough to satisfy the need for a thrill without feeling too dangerous. Sometimes, I would escape the house without my helmet for an extra thrilling time. On that day, though, the universe whispered in my ear. (My mom would have called it common sense, but that doesn’t always avail itself to young immortal beings.)

Grab your helmet. Just this time, you should.

I was (and still am) a creature of instinct, of gut, of faith. An animal listening for cosmic direction. It’s an extension of that immortality, relying on the wisdom of the greater envelope of chaos. So I grabbed my helmet and headed out.

The thrill as I gained speed on my roller blades transformed into terror. At the bottom of the hill, I turned too soon and jumped the curb. I went flying into the middle of the road, pitching backward until my body was parallel to the ground before I was pulled back to earth. Crack! My helmet hit the asphalt first.

Today, though, my head is over my feet. Today, I put my blades back on. Snap, snap.

Today, the universe is quiet.

Ryan ungracefully plops down on the bench next to me. We’ve gone to school together since third grade and this year he’s finally outgrown me. He splays his longer legs and slunks over to lace up a pair of brown leather skates. Ryan is about 60/40 on remembering his own blades. Today is a 40 day.

Even the most professional, slickest skater can’t stay upright on the roller rink rentals. I am convinced they grease the wheels just for the laugh. So we wear our own skates or “Renter Beware”.

With the growing crowd, it’s already stuffy and stale. The air is thick and unmoving, smelling of sugary syrup, butter, and sweat. The closest breeze is someone skating past us on the rink. We revolve counterclockwise in a wide oval. Kids cut through the empty center to chase down their friends and get kicked off the rink for rowdiness. We glide, and sing, and half dance, and laugh over the soundtrack of the early 2000s mixed with 70s hits. Then a slow song comes on – “Couples Skate” – and it’s time to head for Concessions.

We’re balanced over by the brick wall, sharing popcorn and candy while the couples – from newly minted to the ripe age of two weeks – wind their way around, hand in hand.

“Hey Ryan!” We wave him over to join the gossip sesh. We need to know what he’s heard from the low brass corner of the band room.

He glides over, maybe smoother than he’s expected to on rented skates because he stops short at the wall. Before he can set down his topped off cup of Coke, he starts to teeter. Then totter. Dangerous, steep angles. Then he disappears on the other side of the wall.

I lean over to see the rim of the cup, still filled to the brim, just as he lifts it up and onto the wall. Ryan pulls himself upright to a round of applause.