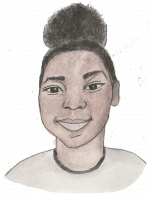 My dad is scary.

Picture a man who wears a suit and a tie six days a week, is always on the phone, usually yelling at someone because they didn’t do what they were supposed to.

He worked out very early in the morning, went to work and came back after dark about six days a week. On Sundays he wore sweats and didn’t start his days as early, but that didn’t stop him from going into work.

He also travelled a lot for work, he was gone almost every two weeks for a few days. When I was about seven years old, my dad started a project in another city. He was overseeing the construction of a skyscraper. The car rides were about four hours each way.

One evening, my dad, as usual, got home at 7:00 p.m., after everyone had finished dinner. My parents sat around the dinner table and talked about their day. My siblings and I joined them for a bit. But we didn’t stay long. I mean, who would want to hang around this scary person?

I went into the next room to do my homework. That evening, it was math.

It was going well, and then I got stuck. I didn’t understand. I remembered the teacher earlier that day, explaining the concept. “Piquet, crochet, intervalle, piquet crochet, intervalle.” The words kept playing in my head like a broken record.

Looking back—it seems easy now but then, yeah—it didn’t make much sense to me.

I thought of my dad in the next room. I probably should have been scared to bother him, but I guess I didn’t think much of it. I was about seven years old and I really wanted to make sense of this math.

I walked up to him with my textbook and asked him to walk me through it.

He was squinting and trying to read my textbook. Watching him, I thought it was both funny and intriguing.

“Tu ne vois pas?” You can’t see? I remember asking him as I watched attentively.

He didn’t answer. He took his time and used different approaches to try to explain it.

He drew on a piece of paper. That didn’t work. He pointed to tiles on the floor. But he kept saying the same thing as my teacher: “Tu as deux piquets, l’espace entre les deux c’est un intervalle.”

I was determined to get it, so I kept asking more and more questions.

My dad got up, went into his bedroom and came back wearing his glasses. All of sudden something changed. He was more alert.

That’s when I realized he really needed them to see. Up to then, I didn’t fully understand how bad his prescription was, or that he absolutely needed them to see properly. In that instant, he became a bit less scary to me, less powerful, in a way, and more of a human, who—like everyone—wasn’t perfect, had flaws.

I kept asking questions until I was able to understand the concept and do my assignment.

To this day, my dad reminds me about my perseverance. But this story also reminds me how attentive and loving he is. Even though he’d had a long day and a hard time reading, he was willing to help, putting his needs aside to listen and help to the best of his ability.

After I discovered this about my dad, it unlocked something in both of us that my siblings hadn’t been able to yet.

From that moment, whenever they wanted something from my dad, they would push me into his room and have me ask him for them, even though I was the youngest.

But then I got smart. I’d walk into his room and get his attention. “Papa?”

I’d point to my sibling and say, “Il veut te dire quelque chose.” —He wants to ask you something.

We’d look at each other and laugh because he’d immediately get what was going on.