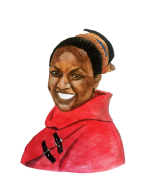 “Lunch break is done, it’s time to move on!” Chebet our forest guide shouted. Tummies full, we all scrambled to our feet, plates and forks still in hand. Nothing tasted better than pilau rice and meat!

“Pick up any plant, leaf or flower, add some water from the stream and make a soup in your plates,” Chebet instructed. I picked pink flowers, small spiky leaves and big succulent leaves. I made a slimy pink soup! My classmates had all sorts of colours and textures on their plates. Kato, always the funny one, pretended to feed Chesuro with his.

“The forest gives us so much,” Chebet said. “Who knows? You may have just created a cure for HIV on your plate!”

“Listen to the forest,” he urged. “What do you hear?”  Captivated by his passion, we closed our eyes and listened.

We were on the slopes of Elgon, a volcanic mountain that lies on the eastern border of Uganda to Kenya. The forest surrounded us, thick, hot, and humid. Colobus monkeys called out to each other, their echoes bouncing off the undulating terrain. The air tasted of fruit, decaying wood and fresh greens all at once. The fiery tengwerek safari ants crisscrossed our paths, moving along highways and tunnels they created using their own bodies. Pity the foot that stepped on these highways!

We trekked deeper into the forest. I was at the front of the line right next to Chebet asking all the questions my nine-year-old brain could summon but mostly just showing off. I knew most of the plant names, I knew how soil was made, I even knew the chemical formula of water! My dad was a forest guide too, he spared no teachable moment.

We came to a large tree with a huge trunk full of thick dark leaves. We rested in its shade happy for a break.

“It’s free time!” Chebet announced. This meant we could do whatever we wanted to do.  Some played dul with little stones, others made dolls from leaves and twigs, others made mukatyet, the donut like cushion made from leaves you put on your head when you carried a heavy jerrycan of water from the river. Others made bouquets of flowers and leaves from the huge tree we sat under. I picked flowers and tried to make a necklace.

Suddenly, a loud rumbling voice filled the air, startled, everyone dropped what they were doing. It was a deep, crackling angry voice.

“Who are you? What are you doing?” the voice demanded.

“Why are you plucking my leaves and flowers?”

I threw the flowers I was holding away from me and braced myself to run. Kato had jumped into a nearby bush. I was heading there too. There was a stampede behind me, children had fallen all over themselves trying to run away in different directions. I looked for Chebet. There he was on the ground tummy first, completely terrified right next to the overturned water jerrycan. When I saw him like this, I knew we were in deep, deep trouble. He motioned to us to get on the ground and stay quiet. On the ground we crouched, hearts beating like drums.

“Why do you hurt me?” the tree thundered again. “Who gave you permission?”

Everything went quiet, a whole five minutes seemed to pass by. The tension was palpable. I heard someone stifling a cry, Kato tried to speak and everyone else hushed him down.

Chebet stood up. “What do you hear the forest saying?” he asked.

This time, even I did not have an answer.

For the rest of the week we spent at the camp, everyone was trying to figure out what the voice was. Was it really a tree? But trees don’t talk. Was it a witch? A ghost? A spirit that guards the forest? Was it a kalabanda—the one with wooden feet that walked around in the night looking for children that failed to fall asleep? Chebet said he had never heard anything like it in his entire life but perhaps we should focus on what the voice said about the forest.

“What was that voice?” I asked my dad immediately I got home after camp.

“What do you think it was?” he said with a playful twinkle in his eyes.

Then I knew. As part of our learning experience, a forest guide with a loud deep voice had entered the tree trunk.

I am almost 40 now, only beginning to grasp the power of voice.

The tree spoke, we stopped and listened.

The tree spoke, we were spurred to action.

The tree spoke, we debated.

What if we used our voices and spoke?