This room has only one, somewhat lackadaisical, heating vent; still, I tend to think of it as a hot spot in the house. It’s a chaotic little cauldron of work, all the surfaces roiling with books and notebooks and hard copies of manuscripts, articles I need or once needed or might someday need. Often, my projects spill out into the rest of the house until I lose something important and have to travel around gathering armfuls of stuff back in. 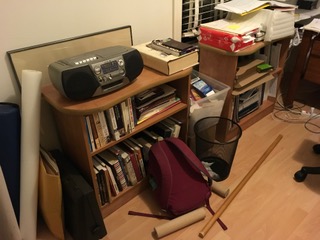 I spend a lot of time in front of the laptop, but it does not occupy much real estate compared to the older tools – paper, pens, even carbon paper – which sit waiting for a first draft, or the handwritten notetaking that opens up pathways in my brain. At the computer, I write and edit and research. I study for the degree that will see me transition elegantly from “student” to “senior” discounts when I graduate in a couple of years. I also administer a reading series here, exchange emails with friends and family, try to keep up with the endless stream of information and opinions on the internet, including my horoscope and the latest outfits of the Duchess of Cambridge. Sometimes, I put the chair into the hall and stretch out on the floor to prepare a movement lesson. I get stressed, in this room. By deadlines, by competing claims on my attention, by my middle-aged drive to make the best use of my time. Then I push myself back from my screen and look around, and I grin. A room of my own, full of projects in various stages of completion, is my definition of wealth. 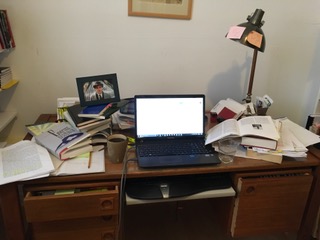 I’ve had other writing spaces. The first was in a house I shared with a boyfriend in the 1980s. We were seldom home (and awake) at the same time, but – fresh from reading Virginia Woolf’s Room of One’s Own – I insisted on having a space. I used to give myself a hard time for needing a room and not knowing what I wanted to do in it, for placing it before other, more practical goals. I spent hours I fought for, in an empty room I fought for, writing in my journal (often about fighting for time and space). Now, those journals are arrayed on long shelves, my hours of ruminating supplanted by a single weekly session where I write what actually happened, not just how I felt about it. 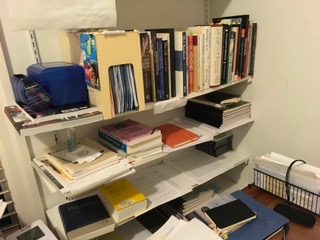 The relationship ended. The need for a writing space did not. One shelf is given over to the books and journals which Diana Kiesners and I published in the 1990s through our small press, The Writing Space. It was a physical space, which we rented together, a metaphorical space of freedom and permission, as well as a publishing company, a way to make space for our own and others’ voices in the world.

Later, I rented a space on my own. I wrote, and taught classes there. Hanging up my teaching shingle began as a cheeky response to the proliferation of MFA programs in the 90s. There was no way I had the money or time for something like that. So, I decided to create a space in the midst of my real life, where people could come, in the midst of their real lives, and help each other become writers. My ads said: If I only had the _________. People answered. A neighbor said she used to stand by my door while the classes were going on and hear us laughing. 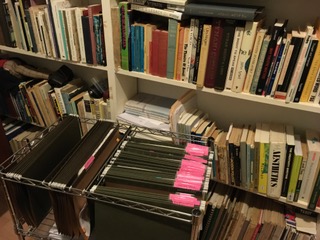 Then I got married and moved into this house. My parents found rest from the illnesses that marked the last fifteen years of both their lives, and I stopped living from emergency to emergency. Here, in the smallest of my writing spaces, I have had an opportunity to think big and deep, my creativity surging as my physical fertility has ebbed away. In these days of scarce resources and expensive real estate I still give myself a hard time. A lot of great writing happens on commuter trains and at kitchen tables. Does anyone really need a writing space? But then again, a lot of important writing ceases to happen in tough times. Maybe the person who shuts up under such circumstances is the very one we need to hear. Maybe I would not have this abundance of ideas and energy had I not, earlier, insisted on creating space to invite it all in. And that’s why I say everyone should have a writing space, even if they don’t know when or with what — or even if — it will eventually fill. 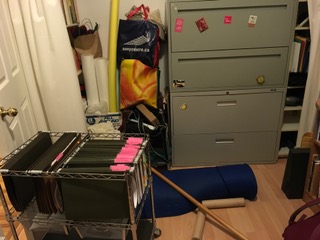