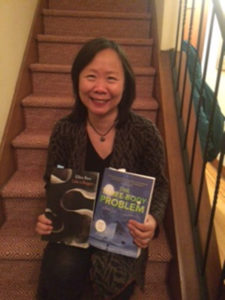 I'm currently re-reading a number of Ellen Bass' fabulous poems in Like a Beggar (Copper Canyon Press, 2014) and Evelyn Lau's lyrical gems in Tumour (Oolichan, 2016), while dipping into W. S. Merwin's Selected Translations (Copper Canyon, 2013). I especially love his terse, concise translations of Malay, Korean, Japanese and Chinese figures, plus the variety of poems from diverse cultures and epochs. If you haven't seen it yet, I highly recommend the documentary about Merwin's life and mission, Even Though the Whole World is Burning, which shows how he and his partner transformed eighteen acres of a barren plantation on Maui into a vast, thriving, lush oasis of diverse palm trees, restoring the soil and ecosystem there over four decades. Merwin the magician! https://merwinconservancy.org/the-documentary-even-though-the-whole-world-is-burning/

Sci fi is what I tend to read for pleasure when not reading poetry (in 2018, I devoured two post-apocalyptic novels--Cherie Dimaline's chilling The Marrow Thieves about First Nations being hunted down for their blood marrow, and Emily St. John Mandel's Station Eleven about a wandering theatrical troupe trying to survive). This past week, I started Cixin Liu's Hugo award-winning bestseller, The Three-Body Problem, which is part of a trilogy that I gave my 17 year-old son for Christmas. He's already read the first two volumes so I have a lot of catching up to do! It's about a secret military project that establishes contact with aliens who are on the brink of extinction. It reminds me a bit of Isaac Asimov's Foundation series in its scope. Reading the same book or series enriches our conversations beyond the usual "have you done your homework yet?" although I am toying with the idea of asking him to teach me how to play on his Nintendo Switch.