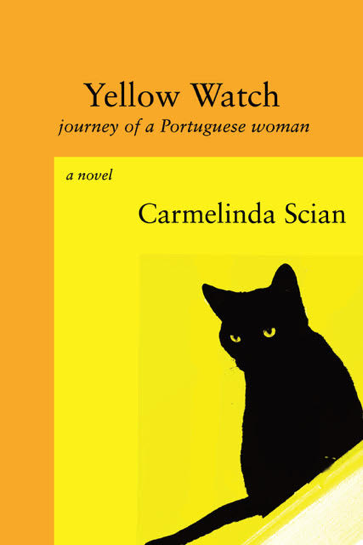 I have followed the journey of Yellow Watch for a decade, from emailed drafts decorated with editorial comments to clean finished book. It was worth the wait.

Scian’s collection of short fiction begins in Portugal sometime after mid-century and is narrated by Milita, beginning when she is a young child. Suspect priests, rich strangers, schemers, molesters, drifters, drinkers, even a warlock populate the small, dusty village where Milita grows up. They live according to the heavy hands of the Catholic Church and the Salazar regime; women are expected to know their place.

Yet superstitions and folk beliefs are often as powerful as the teachings of the church; the women are strong-willed and steadfast. Of her grandmother, Milita says:

Avó believed in the devil, witchcraft, curses, spells, the evil eye, the deadly power of envy and hate, more than she believed in God. In her opinion, God was too weak against the badness of people. “If someone stares at you, make a figa.” She’d thrust her thumb between her curved index and middle fingers to remind me of how it was done. I was the only girl in Amendoeiro with a gold figa hanging from a chain around my neck instead of a crucifix.

But this collection is not merely a portrait of a place and time. The stories are well-plotted and eventful. Dialogue is short, efficient, cutting to quiet turning points; the narrative pace may be pleasingly languid, only to break, suddenly, to something shocking. In one of the richest stories, “The Butterfly First,” which seems to be about Milita’s growing awareness of the adult world around her, such a turning point occurs near the bottom of the second page:

The design on the pillowcases was a bunch of violets with a butterfly hovering above it. I decided to embroider the butterfly first… “You’re nine years old now,” Avó had said when she handed me her gift. “You’re too old to play with dolls; it’s time to start working on your trousseau.”

Scian then stitches together several moments in which Milita glimpses the complications of adulthood: furtive lovers in an alleyway, the dangers a friend’s older sister faces giving birth, a police crackdown on striking cork factory workers.

A lesser writer might have left the story at this – a slice-of-life in this very particular time and place. And yet in the end, the story turns on Milita’s reaction to all of this.

If one thing might be changed, it is the timid way the book is advertised: by adding the subtitle and labeling the collection a novel, the publisher clearly did not trust readers to read the blurb or open to the first page.

Read this as a linked short story collection, roughly chronological; read each story with the diligence and care it deserves.

Coincidentally, I’ve also recently finished another collection that must have been a long time in the making: Alexander MacLeod’s Animal Person.

The collection is bookended by the two most powerful stories.

“Lagomorph” quietly contrasts a middle-aged man’s disintegrating marriage with his attachment to the family pet, an ancient rabbit. Why “quietly”? Because MacLeod avoids direct parallels. The marriage is disintegrating quietly, too, a consequence of children growing up, life changing, and smaller choices that in themselves might not have led to this. The sense that the end of the relationship was not at all inevitable, but happening anyway, left me with a taste of powerlessness, of the limitations of human ability to choose our path, especially when there are two people involved in the choosing. This sense of powerlessness is the story’s superpower.

A comment on the back cover by the writer Ron Rash describes the story “The Closing Date” as the collection’s masterpiece, and I have to agree. Here, a young family moving to a new city stops at a motel. The late summer is oppressively hot, the motel room unairconditioned; the cold water in the bathroom won’t work. The family is helped by a stranger staying in the next room, referred to only as “the murderer.” The narrative moves forward and backward in time, building to the night they spend next door to him. “The Closing Date” recalls a couple of other famous stories: Joyce Carol Oates’ “Where Are You Going, Where Have You Been?” and Flannery O’Connor’s “A Good Man is Hard to Find.”

I would recommend Animal Person unreservedly, too.

Ian Mallov is a chemist and writer who grew up in Truro, NS and currently lives in Halifax. His fiction has appeared in The Antigonish Review, his science writing in The Nexus. He is working on a short novel.