Kim Jernigan in conversation with Anne Marie Todkill, whose poem “Afterbirth” was the hands-down winner of the 2020 Nick Blatchford Occasional Verse Contest

“Afterbirth” is a joyful, near-perfect poem occasioned by the birth of a grandchild whose “nuchal hand”—a hand held beside the cheek or neck—makes the delivery “a little dangerous.” The poem turns on the juxtaposed images of the scarred placenta and the footprint on water left by a breaching whale. The one of our adjudicators who has spent some time studying whales at sea wrote, “I like and relate to the scary and magic moment of witnessing the breaching of a whale—an experience you thought YOU were looking for, but perhaps, in fact, the whale was following you, quite aware, first hiding, then almost taunting you with the breach. I loved the poet’s taking that feeling and moment to talk about things arriving in life, long anticipated, dangerous, scary but magic.” Asked about the pairing of a child’s birth and a whale breaching, a word that makes us think also of “breech,” and hence the hazards of childbirth, Todkill responded:

There are moments of anticipation when time seems to gather itself for a big reveal—whale-watching is like this; waiting for a birth most certainly is. (Let’s make this easy and stick to happy events.) Aside from our reaction to the outcome—delight, joy, relief, wonder—sometimes there’s also a super-charged sense that the event has always been held in time, waiting in the wings, already built into our lives. A baby arrives with her ancient newness and you think, ‘Well, of course. There you are.’ Besides, is there anything more gigantic, more whale-like, more space-taking and boat-rocking than a baby?

What I remember from the births of my three (all unaided and unfraught even though the last child, a boy, was a lunker, two feet tall from the get-go) is that the experience of labour was aptly named. Thinking of it as work rather than pain really helped me through. It was only later that I thought about the miracle of it. Todkill’s poem, in contrast, conjoins throughout the workaday and the miraculous aspects of childbirth. The midwife holding up the afterbirth, for instance, is compared to a grocer holding up a slab of meat, but she expounds with both awe and respect on the placenta’s uniqueness as an organ—single use and shared between two distinct bodies. I asked Todkill when that image came to her, in the moment or afterwards?

The midwives gave me the poem, really. My husband and I met them right after the delivery, and they were, like the rest of us, on a high. Tired as they must have been, their enthusiasm spilled over into a very informative “tour of the placenta,” as they called it. Examining the placenta is of course an important protocol, but the midwives were enthusiasts who clearly loved their job—the moms, the babies, the skill, the science, the art of midwifery. One particular thing they pointed out—the place where the placenta detaches from the womb—stuck with me for reasons I couldn’t figure out until considerably later. A piece of writing often starts for me that way, in a detail or image that mutters in some corner of my mind until I attend to it properly. Finally, I got to the memory of a whale’s footprint on water—another learning moment, during a camping trip across Newfoundland with my then eleven-year-old daughter. And I realized that memories of those days would now always have the future overlaid upon them. I guess this mirrors the way very young children see the world—as if it has always been theirs to occupy, and with no sense of an era “before baby.”

Todkill’s other poem on our shortlist, “Flight delay with telephoto,” has a very different theme and subject, a Cooper’s hawk eviscerating a pigeon. What connects them is a child. As the poet is photo-documenting the dismemberment, a mother walks by with a baby in a stroller. The juxtaposition raises (or it did for me) the spectre of what all parents face, how to mediate between the perils and dog-eat-dog/bird-eat-bird nature of existence and the desire to protect a child from, or prepare a child for, difficult truths. I asked her to say something about the choices she made in giving this occasion an embodiment in verse.

Take one birder and uncommon chance to observe a hawk for several minutes at close range, toss in an incurious passer-by, add the social awkwardness of the urban birder (there she is again, prowling around with her camera and binoculars) and you have the ingredients for an outburst of some kind. The default container for a birdwatcher’s excitement is, alas, comedy. But, truly, the woman with the stroller was stranger to me than the ravening bird—especially since I had the impression that she was travelling in a don’t-make-eye-contact capsule rather than consciously whisking her child past a gory sight. Ah, but the child. This adds a complication. But, while the baby is sleeping, let us agree—photographer and neighbour, poet and reader—to take a careful look at the thing and appreciate, for a moment, its startling beauty. This is what every birder wants—to leave the comic realm and draw the uninitiated closer; to say, Come look at this with me. 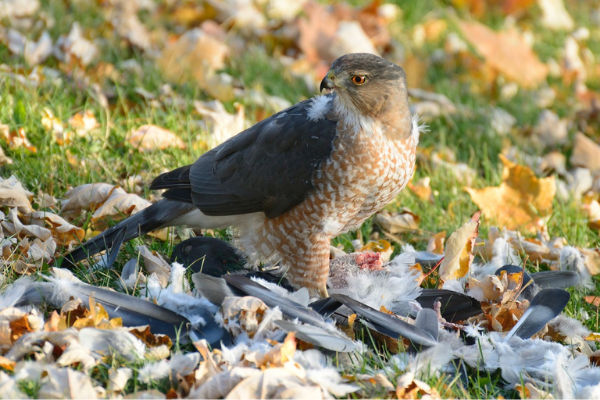 In general you seem the kind of poet for whom poems originate in the world of experience rather than ideas. An occasional poet! I know you have a collection coming out with Brick Books in 2022. Can you say something about it? Its title and arrangement? Would it be right to call you a nature poet as well?

It wouldn’t be wrong to call me a nature poet, as far as that goes, but I would ask the reader to leave in a basket by the door, along with her cell phone, all notions of nature as sanctuary or escape, and of the nature poem as a soothing interlude, even though these things can certainly be true. We are not tourists on the earth, and nature is where we are, not a place we go to (although wilderness may be). Some find terms such as “environmental poetry” and “ecopoetry” more satisfactory, reflecting attention to systems, habitats, human responsibility, and interconnectedness—and also, sadly, the difficulty of contemplating “nature” without also contemplating its ruin. (The loss of Eden is an old theme, but our present angst is undeniably acute.) Redefinitions of “wildness” and “wilderness” and concepts like “geopoetry” (see Don McKay) and “biophilia” (see a forthcoming issue of The Dalhousie Review, edited by David Huebert) might deliver us more precisely to our subject. Perhaps “biopoet” would serve to help jettison the baggage of nostalgia, privilege, and even colonialism that weighs down “nature appreciation.” One thing that nature poetry can’t do is escape its own historical moment—even as it contemplates the timeless or recurring. By that logic, can there be a pure category of “nature poetry?”

Al Purdy described the region of Ontario where I live—“The Country North of Belleville”—as “a little adjacent to where the world is.” I think of it as a little adjacent to the wild, and that’s what a lot of my poems are about: degrees of wildness and their proximity to the human-modulated world. Paying attention to this is important to me. But I’ve been thinking lately that my core subject is perhaps not “nature” so much as “time.” I often think about how socio-historical forces shape individual lives, and that comes up in some of the poems in the collection I’m working on with Brick Books. I’m at the very beginning of the process, so I don’t want to get ahead of author–editor discussions by being too specific. But the collection contains many adjacent-to-wildness pieces, various poems on familial and interpersonal relationships, and also—a departure for me—a sequence of dramatic monologues by real and imagined historical figures. Mind you, one of those characters is a famous nature-lover, and another is a wolf …