K.D. Miller’s latest book, Late Breaking, was released in October 2018 by Biblioasis. She is the author of four other story collections, a novel, and a book of essays. We discussed Late Breaking by email as the year drew to a close.

Q: Organizing a collection around the Colville paintings is an intriguing idea, and I imagine it’s also a constraint. Given how varied the paintings are, how did you conceive of the many linkages among the stories?

In no way did I ever feel constrained by using the Colville paintings as visual writing prompts. In fact, I felt as if I could spend the rest of my life pulling stories out of them. I still do feel that way and may revisit them for another book in the future.

At first, I did not conceive of the usual kind of linkages – character, setting, some kind of theme, etc. Instead, I thought that any coherence would come about through Colville’s influence and take the form of a consistent tone or perhaps some echoing of image. But each story, I thought, like the visual work that inspired it, would be a world unto its own that I would enter and attempt to realize.

Once I got started, however, I began to imagine linkages in the lives of the characters. So, the paintings were still the springboard. But once a story was “sprung,” it could reach out to other existing stories, or beget new ones.

Q: How did you choose these paintings from the exhibition to write about? 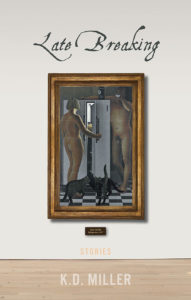 It would be fair to say that the paintings chose me. When I attended the Alex Colville exhibit at the AGO in 2014, I kept coming back to a small, quiet painting titled “Woman on Ramp.” It shows a white-haired woman (modeled on Colville’s wife, Rhoda, as so many of his women are) wearing a bathing suit and ascending a wooden ramp up from what looks like the shores of a lake.  As I gazed at the painting, I began to feel afraid for this solitary, exposed old woman. What was she walking toward? What was waiting for her inside the cottage at the top of the ramp? That was the seed of “Witness,” the first story I completed, and my introduction to Harriet, who became a kingpin in the rest of the book.

Similarly, the painting “Kiss With Honda” was the prompt for the story “The Last Trumpet.” It shows a mature couple (in fact Colville and his wife.) He is leaning out the window of a car. She is bending to kiss him. At first glance, there is a sweetness to this scene – the older couple, still affectionate. But then I thought, wait a minute. What if the viewer is the partner of one of these people? Oops. Suddenly not so sweet.

Q: Of all the characters, I was most drawn to Harriet. In her flaws and uncompromising ways, she called to mind Olive Kitteridge, only I believed more in Harriet and her decisions. You give her a fully rendered life, replete with problematic motherhood, longing and desire, failing body, scorn for fools, disregard for personal safety, and tough-love interventions that, I have no doubt, will save a teenager. In rendering Harriet’s character, were you consciously writing against stereotypes about older women?

Thank you very much for the Olive Kitteridge comparison. I loved Strout’s book and learned a great deal from it about what you can do in a linked collection.

As for Harriet as she relates to stereotypes about older women: I don’t do “issue” fiction, either as a writer or a reader. That is, I don’t start with a political or social issue and try to bend a story or character around it. In my opinion, that’s a sure-fire recipe for bad writing.

Harriet is Harriet. I got to know her as I wrote about her – how badly she misses her husband; her difficulties relating to her son; her affection for her son-in-law; her friendship with Jill; her memories of Morgan, etc. I learned a long time ago that it is best to set a character free, then follow them around and find out what they’re going to do next. This is not to say that I indulge in some kind of automatic writing. But I want to be open to any surprises my characters might have in store for me. Harriet’s toughness did surprise me. So did the way she warmed up to her son after his illness.

But to get back to your specific question: I think the way to blow clichés and prejudices out of the water, as a writer, is to write as honestly as possible, with your eyes wide open. Allice Munro, I think, is the quintessential example of this. People are people. They are strange and mixed-up and gnarled and full of all kinds of secrets and surprises. Once you get to know someone as an individual, it is impossible to fit them back inside any stereotypical box.

Q: Were there other stories prompted by other Colville paintings that did not make it into the collection?

Not full stories, but incidents and characters, yes, that did not make the final cut. As for the paintings, not so much. Once I started really studying a painting and working with it, the story came into its own. That said, I never attempted to “explain what is happening in the picture,” the way we had to in school. Instead, what I would take from the paintings would be more like a mood. A chill down the spine. An image that snagged my imagination and would not let go.

Q: As a reader, I experienced bursts of joyful recognition on encountering characters, themes, and plot from one story in a different story, told from a different perspective. Immediately after reading the book, I mapped the characters and the way they appeared and intersected in stories set in different eras. The effect on me was also disruptive–it made me question my earlier reading, complicating what I thought I knew. What were your intentions? And how did you keep track of it all? I’m envisioning a massive spreadsheet.

I’m so glad you enjoyed the linkages. And I would love to see that map!

No, I did not use a spreadsheet or anything like that. I moved from story to story, sometimes finding links that surprised even me. For example, in “Flesh,” when Harriet and Ranald are having lunch in the Rendezvous, there is a reference to two men at the next table talking about going to the aquarium. That’s Eliot and Bill from “Octopus Heart.” (One thing that helped with the linkages is my having turned Toronto into a city with exactly one restaurant!)

When I started writing the title story, I wanted to give Jill a buddy – someone to talk through all her problems with. Well, Harriet was the right age, so she got a cameo in the story “Late Breaking” as Jill’s old friend. So I had to decide how they met. And that brought Morgan into the picture.

A very big surprise for me—one I didn’t register until I was almost through writing the book—is that Morgan, who never actually appears in real time, is the common denominator. Directly or indirectly, she is linked to every other character.

Q: Death–whether it comes violently or naturally, suddenly or slowly–is present in all the stories. There are even some ghosts wandering around. What is the function of death in Late Breaking? Is it a character, or even a setting?

Death is a presence in Late Breaking, as it is in life. Of course, we’re in a state of almost total denial about that. The one inevitability is the thing we go around pretending will never happen. Death has actually been a presence in my fiction right from the start – whether the physical death of an individual, or the end of a child’s innocence, or the “death” involved in life’s transitions. Shortly before I retired from my job of 35 years, a spiritual advisor warned me that, subconsciously, we associate retirement with death. That was very good information. Helped me put things in perspective and not have unrealistic expectations.

Anyway, I doubt I could do any writing at all without death, figuratively speaking, looking over my shoulder. It’s just there.

Q: There is dry humour running through the stories, coinciding with dark and disturbing incidents. You take jabs at our literary awards culture. I note that Late Breaking made The Globe and Mail 100–the best books of the year. How do you feel about literary awards and the impacts they have (or fail to have) on Canadian book culture?

Frankly, I love literary awards. Bring on the glitz and the glamour, say I, and nominate me for every one of them. Yes, I mean that. My book All Saints was nominated for a major award, and it was a real boost for me and for the book. I got to do all kinds of readings and panel discussions—I love doing both—and got to know the other nominees. Great fun, and I sincerely hope it happens again. Besides. Canadian authors don’t get much by way of money. So what’s wrong with having a chance to win a nice chunk of change?

But you’re right—I did take a satirical poke at the whole awards culture. Still, it could have been any kind of award. There is something about instant celebrity, as Jill experiences it, that is not good for the soul. It is an unreality. It does not nourish. It’s like trying to live on cotton candy. So it’s probably a very good thing that it tends to be short-lived.

Laura Rock Gaughan‘s first book, a short fiction collection called Motherish, was published in 2018. She lives near Peterborough, Ontario, where she works as a communications consultant to non-profit organizations.