I’m about a third of the way through the 2018 edition of The O. Henry Prize Stories. I love short story anthologies and the O. Henry is my favourite, so I always make sure it turns up in my Christmas stocking. Not only are the stories consistently wonderful but the story of the series itself is so delightful as well — William Sydney Porter’s grieving friends gathering at the Biltmore Hotel and deciding (no doubt under the influence of a few cocktails) to read all the stories published in 1918 for an annual bearing his pen name. 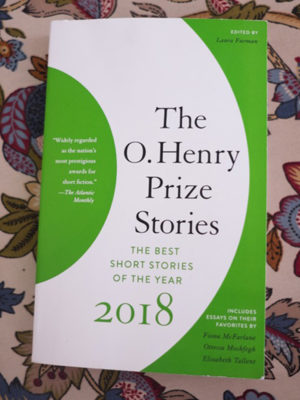 A century later, I comb first through the table of contents to see if I recognize anything (yes! Lara Vapnyar’s “Deaf and Blind” from The New Yorker). Next, I read the essay on a forgotten artist — often a woman (this year, Gina Berriault, winner of the PEN/Faulkner and National Book Critics Circle Awards for her 1996 fiction collection Women in Their Beds) — then I jump in. So far, the story I’ve liked most is Jo Ann Beard’s quirky exploration of violence, “The Tomb of Wrestling,” which is also the first pick of two of this year’s guest jurors, Fiona McFarlane, Ottessa Moshfegh, and Elizabeth Tallent. After I finished it, I did what I always do, which is read the writer’s comments at the back. I love finding out where stories come from and, in Beard’s case, was amused to learn that the seed was a single stray sentence (“She struck her attacker in the head with a shovel, a small one that she normally kept in the trunk”) that struck her as she was cleaning her car.

Looking forward to the rest!