Deep in my heart, I knew my daughters would never go back to Baghdad, not even for a visit. They would say that they didn't have any pleasant memories back there. Their only memories were of the war.

It was 2018, and I was sitting on a chair in my home in Baghdad. I was trying to figure out the most important things to take along with me to my new home in Canada. I heard the chirping of the birds on the citrus trees and the date palm tree in the front yard of the house. I could smell the dust, as it was windy that day.

When I was young, and even once I’d grown up, I never thought that one day I would leave Baghdad, my birthplace, and immigrate to Canada. But in the aftermath of the war in 2003, I was afraid for my daughters’ safety. I didn’t send them to school for a year, instead home schooling them. During that time, my daughters were able to distinguish—from the echo of the blast—whether it was a car bomb, a roadside bomb, or a mortar bomb. Those explosions happened frequently. That wasn’t a normal way for a child to grow up.

When my daughters were born in the nineties, readymade clothes were not available due to the sanctions against Iraq. We could import fabrics and it was expected that Iraqi women would sew their own clothes. Actually, that task brought a lot of joy for me at the time, as I was on maternity leave from the university where I used to work as a lab instructor.

Now, in front of me, there were two old suitcases and a large box on the floor. I opened the suitcases. They were packed with my daughter’s clothes. The ones I had sewed myself, when they were little kids. They were washed, ironed, and neatly packed in the suitcase, with soap bars in between. I flipped between the piles, and chose a newborn white gown, a toddler skirt, and their first navy school uniforms. I would donate the rest. Deep in my heart, I knew my daughters would never go back to Baghdad, not even for a visit. They would say that they didn’t have any pleasant memories back there. Their only memories were of the war.

I felt tired, so I stood up to stretch my back.

Then I went to the kitchen to prepare some steeped tea with cardamom. I turned on the radio. It has been a long time since I’ve listened to an Arabic radio channel. I went back to finish the task dragged the box that was full of family photos. “Oh my God, there are so many!” I said to myself. Those photos documented my family’s life, so without any hesitation, I decided to take them all.

I breathed a deep sigh of relief, as I finally managed to pack the memories of my 45 years of living in Baghdad in that 23kg suitcase. I would take this suitcase along with me to my homeland, Canada, where we were starting a new thriving life.

I relaxed after feeling that my mission was accomplished. I listened to the song on the radio, called “Sometimes I Am Longing For,” performed by the Egyptian singer Mohamed Fouad. I felt as if the singer was dedicating the song to me, as the lyrics expressed my feelings at this moment.

At times, I long for the days when I used to fall asleep wearing my new Eid clothes, and for the feeling that tomorrow is far away.

I miss my mom’s cup of coffee when I studied, my father’s joy when I passed the exams, my family’s gatherings when we travelled.

At times, I miss my uncles and grandparents, my grandmother’s tales. I long for one of the good old days when happiness filled the air.

Those things happened a long time ago, they carved images in my mind just like my name. Neither the coming days nor life could ever erase those memories. 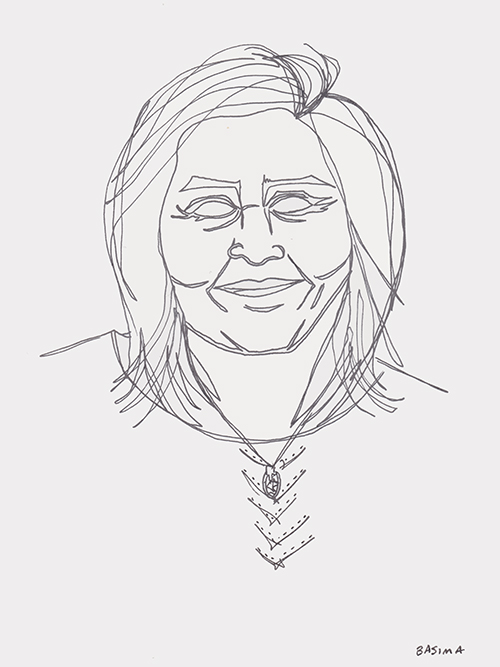 Basima’s story was produced in The X Page: A Storytelling Workshop. To learn more, visit thexpageworkshop.com.