I thought as the local village person, he should talk first. But maybe he thought because we were the city kids, we should break the ice. We didn’t know how things worked here. So we stayed silent and built.

My younger brother and I were bored. We had come from Port of Spain, which is the capital of Trinidad and Tobago. We had been whisked away from our toys, our books, our TV shows, to the village of California, in Central Trinidad, for a family wedding. The name California sounded glamorous at first; in my nine-year-old imagination, I thought I would be seeing mansions and expensive cars.

Instead, we sat at the edge of a dirt driveway which stretched out from Great Uncle Nello’s purple two-bedroom house. It was one of the more upscale houses in California, with white security bars over the window and a grey sheet metal roof instead of thatch. The car and the jeep in the driveway were dusty and scratched and dented.

The sun was high overhead in a cloudless sky. Port of Spain was hot, but the heat was nothing compared to the oven of Central Trinidad. The land surrounding California was flat: ideal for planting sugar cane. There were no hills, no valleys, no rivers to take the edge off the heat.

Men from the village were constructing the wedding tent. They lashed fresh green bamboo poles to the window bars on the outer wall of the house, building into the grass lot next to it. The men cut the bamboo lengths with machetes, sweat pouring down their hairy bare brown chests. They worked silently, and the rhythm of the metal blade against cracking bamboo was their conversation.

I heard the clanging of pots and metal tawas. Earlier, Uncle Nello had shown us his precious tawah. Nello took pride in his cooking skill and his tawah—a circular cast metal pan with no side used to make the buss-up shot. The tawah was gigantic, bigger than me with my arms stretched out. It could not fit on a regular stove, so Nello had set up an outdoor kitchen in the back yard. The giant tawah rested over an open flame cradle in a mud stove. He put flatbread dough on the tawah and turned in around bit by bit to cook it evenly.

He greased the bread regularly with a huge brush dipped in yellow liquid. “You know the secret to the perfect buss-up-shot?” he asked conspiratorially.

We knew the answer from the commercials on television. “All natural Anchor Cowbrand ghee, of course,” we chanted like the model on TV.

“No,” he said scornfully, “my buss-up-shot is famous because I use melted butter. But don’t tell anyone! It is our secret.”

He flipped the giant bread over and greased it again with the brush. The bread was browning and bubbling and blistering. Another dousing of butter and he swished the bread, still flaky and warm into a tablecloth. He clapped the cloth vigorously and “buss it up” until the bread was like strips of a distressed cotton shirt. He took two pieces out and gave them to us to sample.

“You see what I mean? Best buss-up-shot in Trinidad! Now, go in front to play. My son who getting married coming any time now and I have plenty more to make.”

And this was how we found ourselves in the front yard. There was nothing interesting except the prayer flags on the small patch of grass in front. The flags were faded red and orange pennants attached to dry brown bamboo erected from past prayer ceremonies. The pennants hung listlessly in the hot air. We saw pebbles close to the edge of the road. I held a smooth one between my thumb and my forefinger and tried to launch it like a marble, but it skittered unpredictably to the right. My brother, in the meantime, had collected a handful and piled them on the driveway.

“Bigger than Mount Everest!” I challenged. We continued the hunt for pebbles and added to the mound.

A boy who seemed to be our age edged toward us. His legs were skinny and dusty and he wore no shoes. He had very big eyes and untidy hair. His shorts were too big for him, and his blue T-shirt had holes in it. He joined us in the mountain-building expedition, but we said nothing to him and he said nothing to us. I thought as the local village person, he should talk first. But maybe he thought because we were the city kids, we should break the ice. We didn’t know how things worked here. So we stayed silent and built.

Great Uncle Nello’s sister Chan was helping him plan the wedding. She had a high-pitched voice and we could hear her clearly from the driveway even though she sat back on the front verandah. She talked non-stop in a mix of English and Hindi and it was all about the wedding.

“How much people coming to this wedding? I don’t have enough plates. Eh, you, yes, Mukesh,” she flagged down an unsuspecting victim who was working in the yard. “Go in the back and cut down banana leaves and then divide them into four pieces. Wash them down. People have to eat off of them. And do it properly—you have a reputation for being dutty at times.”

Everyone looked at me and Deo. I looked at Deo, but he stared blankly back. Maybe he didn’t know the rules either.

She turned her attention to the leader of the tassa drum band. “You telling me you want another five hundred TT dollars because of the recession?” She sucked on her teeth loudly making a “steups” sound to show her disdain. “You don’t even beat your drum in time, it does be all ‘kilkatay.’ Alright, I will give you an extra two hundred because I am a kind and generous person.”

She conferred with a lady on the verandah with her. “I don’t know why Nello insisting that we serve curried chataigne at the feast. He knows it go make everybody gassy. Chataigne, my foot, more like ‘shit’-aigne.”

Her anxiety then turned to panic, “Oh lordie, we need a virgin to rub de saffron.”

“What about Indra?” the lady offered.

“Ah said a VIRGIN, Parbatee,” Aunt Chan retorted sharply and the others on the verandah burst into laughter. “Nello son go be here any time soon, and we need a virgin to rub de saffron.”

A white Crown car pulled up to the edge of the drive, kicking up the dust. We scampered back, abandoning our Mount Everest of Pebbles project. Chan called to Nello, “Look, you son Deo reach! Lewe start de prayers.”

Uncle Nello ran up to the car, opened the door and embraced his son. As he turned to take Deo into the house, he spied me looking on and his face lit up. “Come, girl, come. We need a virgin to rub de saffron.”

I knew the Virgin Mary from Religion classes at school and could not see how she would be involved with Hindu wedding prayers. I had no idea what rubbing de saffron was. I looked to my dad to intervene and he shrugged.

Aunt Chan took me to the partially constructed wedding tent. She filled a brass cup with water and then arranged green mango leaves, stalks of pink ginger lilies and a puff of red ixora in them. She smoothed my hair back and straightened the straps of my blue cotton sun dress. “Take off your sandals,” she said distractedly and I obeyed. In the meantime, a small group of family and neighbours gathered in the tent and sat on mats on the ground.

Uncle Nello led his son Deo into the bamboo tent and seated him under a curtain of coconut fronds. Cousin Deo had changed out of his khaki pants and red polo shirt and now wore only a white dhoti loincloth. Uncle Nello, holding a brass plate, dipped his pinky finger on the edge of the dish and drew a red dot on Deo’s forehead. He sang Hindi prayers and took one of the mango leaves out of the cup. He shook drops of water off the leaf over Deo and then me.

He handed me the plate, which was filled with glittering, yellow paste.

Everyone looked at me and Deo. I looked at Deo, but he stared blankly back. Maybe he didn’t know the rules either.

Uncle Nello whispered very loudly, “Rub up de saffron on he chest. He is the bridegroom.”

I wanted to obey. But I didn’t want to touch a strange man. He was a cousin—one that I had never met. He was naked from the waist up.

Uncle Nello grew impatient. He took my free hand and guided it to the plate. “Take a handful and rub it up on he chest!”

The saffron paste was golden and shimmering on my fingers. I wiped one dollop on Deo’s chest and stopped, hoping my mission was fulfilled.

He held the plate for me and I plunged both hands in. A cloud of gold dust surrounded me. I rubbed the paste on his chest, his shoulders, his upper back, in circles and spirals.

Deo’s expression never changed and nor did mine. Uncle Nello and Auntie Chan nodded and beamed approvingly.

“Alright, you could finish now. Chan, take her to wash her hands.”

Everything was yellow. Besides my hands and his body, there was gold dust in my hair, on Deo’s cheeks, flecks on the white cotton trim of my sundress and in streaks on Deo’s loincloth where it nestled in the folded fabric.

Aunt Chan led me out of the tent into the blinding light of the noonday sun. She gave me a sideways hug, careful not to get saffron stains on her new pink sari.

“You did good, Anandi. I was really worried we wouldn’t find a virgin to rub de saffron today.” 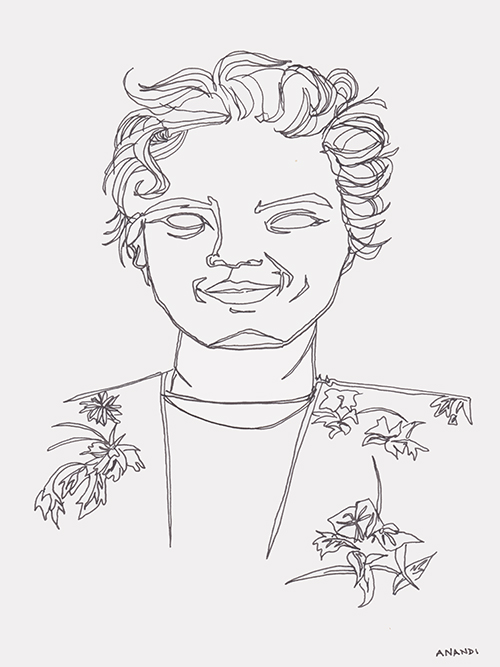 Anandi was born in Canada, but she took a detour in her childhood to Trinidad and Tobago, her parents’ homeland. She returned to Canada for University and stayed. Her three children and husband keep her busy. She loves to be involved with the local Caribbean Association, community television and improv acting.