“I had not read Madame Bovary in twenty years and returning to it left a very different impression on me. I was less interested in the type of woman Emma Bovary was or whether I related to her. It was the world of the novel that took my attention.“

I’m a huge Deborah Levy fan (I recommend Hot Milk to everyone – read it!) and I’ve just finished devouring her “living biography” Things I Don’t Want to Know. It’s about her going to write in Majorca after a break-up. Or that’s how it begins. It’s really about her childhood in apartheid South Africa after her father was incarcerated and tortured. It’s about other things too. Private things. Complicated relationships, both politically and personally charged. I took a workshop with Wayson Choy once and after each manuscript we read he always asked, “What is this about?” I’ll admit, it’s a question I still find difficult to answer.

I also recently read Yiyun Li’s memoir Dear Friend, from My Life I Write to You in Your Life, which is a quote taken from Katherine Mansfield, who is one of those writers I keep meaning to read but still haven’t. I came across Li’s book after chancing on Rachel Cusk’s review of it in the New York Review of Books. That’s a bit unusual for me as I don’t often read book reviews. Mostly I take friends’ recommendations or end up reading random books I stumble across. I keep a list of what I want to read which is more of a dream aspiration than anything achievable, in this lifetime anyway. Li’s contemplation on reading, writing, language, and depression in Dear Friend stayed with me. It is still jostling around inside my mind. At one point, Li writes: “I am not an autobiographical writer – one cannot be without a solid and explicable self… What kind of life permits a person the right to become his own subject?” Such a fascinating question in the midst of a memoir.

I’ve also added several books and stories Li mentions to my own list: Stefan Zweig’s Letter from an Unknown Woman, Roman Rolland’s Jean-Christophe, and Seneca’s Letters from a Stoic. Apparently, I keep going on about Li’s book because my daughter now wants to read it. She wants in on the conversation I’m having. I love when books become their own living language, when they spark a dialogue that is impossible without them.

As for fiction, I re-read Madame Bovary this fall. I was travelling to Normandy, France and planned on visiting Ry, the provincial town where the story was set. I had not read Madame Bovary in twenty years and returning to it left a very different impression on me. I was less interested in the type of woman Emma Bovary was or whether I related to her. It was the world of the novel that took my attention. I was also re-reading Their Eyes Were Watching God by Zora Neale Hurston at the same time. (Total coincidence – my novel group has chosen it.) Very different novels but I could not help feeling the pulls between them: both women struggle through marriages, trying to define themselves on their own terms and grappling with their allotted roles in society. Sometimes novels have discussions between them that their writers never intended or imagined. It is only in our minds that they collide. Isn’t that one of the best things about reading?

Oh, also: Ottessa Moshfegh’s short story collection Homesick for Another World. Still in the middle of it. So good. 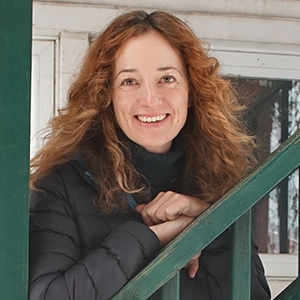