I have two writing spaces: OUT and IN. OUT is on the subway, walking the streets or in the woods, riding my bicycle, wandering museums, grocery shopping. OUT is any public space where the mind wants to swerve towards subconscious intuitions surrounding images, ideas, and imaginings searching for an unknown coherence. Poetry at its most immediate and fluid. The strong, unexpected dose. OUT is for my little blue notebooks, green or black pen, iPhone voice recorder and / or iPhone notes.

IN is sitting down at the MacBook Air and transcribing, shaping, editing. The days and weeks of sustained work on a poem. If something makes it from OUT to IN, there’s a good chance I’ll live with the poem it until I can’t, so the space becomes a part of the poem’s transformation to becoming a thing in the world. For the past eight months, IN occurs in my small apartment in the Yamashina Ward of Kyoto. The Air sits on the Japanese-style table that came with the place, and I eat there, too. The table is surrounded by the books sustaining me at the moment and they seem to keep arranging themselves in patterns on the floor. A lot of the newish books rotate, but two of my old masters, Dickinson and Háfiz, are always there. Lately I’ve been writing about animals, and I see “The Tiger Hunt” by Rubens and “Head of a Stag” by Velázquez in big art books I’ve left open. In front of me is a framed poem that my friend Randy Lundy gave me, which makes me feel good whenever I need to feel closer to home, and some printed versions of my poems. It also seems important that behind where I sit to write is the bed where I sleep and dream.

One of the main things that seems to be doing a lot to make this place a good IN is the small shrine. Contained in a cigar box that my 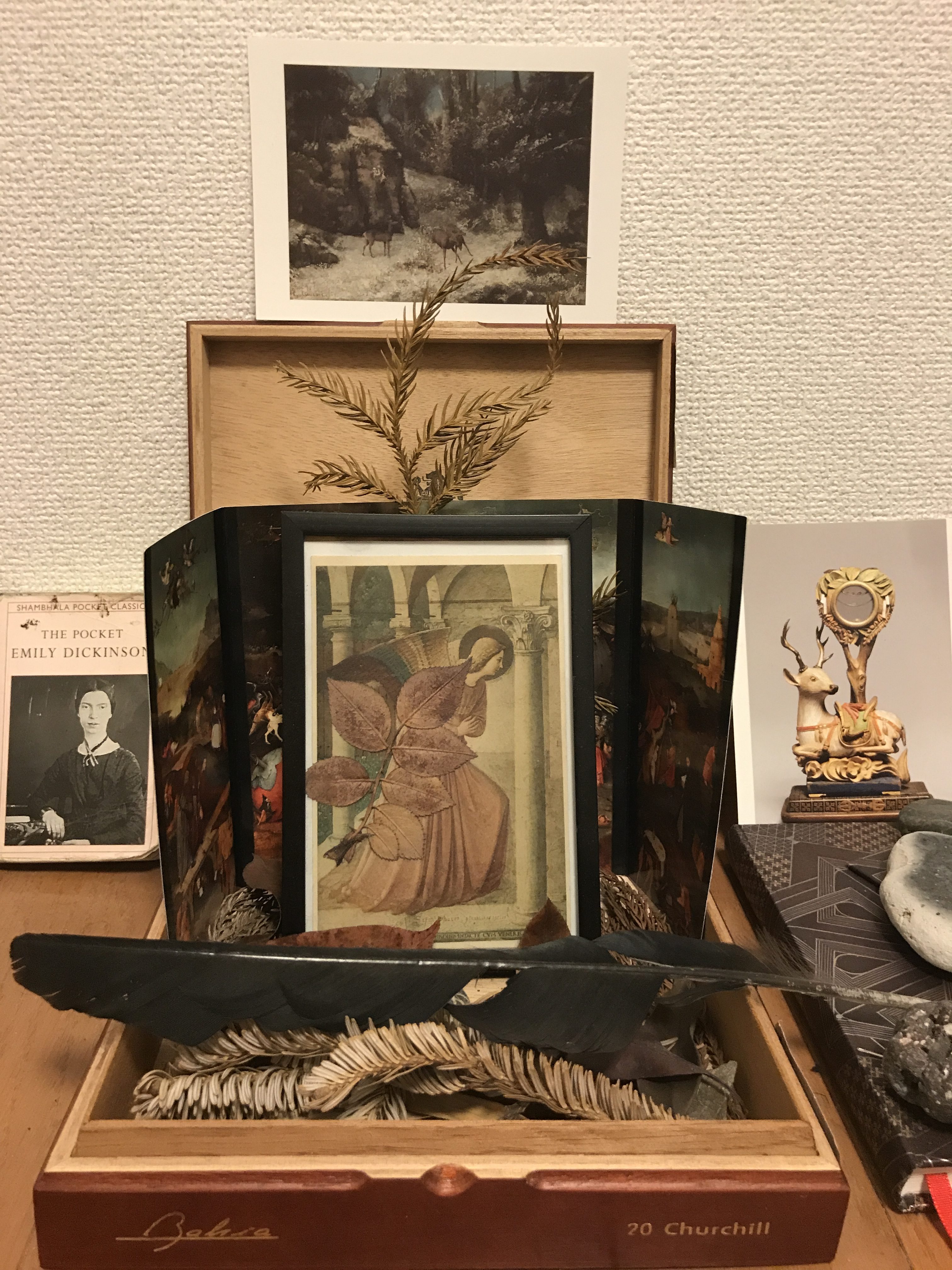 neighbour from the USA gave me, the central relic is a framed postcard of the Annunciation that I bought in Rome. Along that divine messenger Gabriel’s spine, pressed behind the glass, are rosebush leaves I took from the hedge surrounding Castle Muzot in Switzerland, the place where Rilke completed the Duino Elegies and composed the Sonnets to Orpheus. Besides the postcard, there are sprigs of pine from Canada that I like to smell, some stones that give off unique energies, pretty leaves, a cardboard triptych by Bosch, and a crow’s feather I found in a nearby forest that keeps me conscious of the shadow side. Hidden behind the shrine is a picture of Kannon, the thousand-armed female/male Goddess/Bodhisattva who reminds me, and hopefully the poems, to be permeable.

Every artist probably has their own sense of what makes their IN. For me, the presences I’ve gathered here enlarge this small physical room by offering many gateways for the imagination to pass through. This fluidity helps to open what Rilke called “world-innerspace,” that place in ourselves where “The birds fly quietly / through us.” When the writing is at its best, I sit on the small cushion at the table in the glow of the screen and disappear.