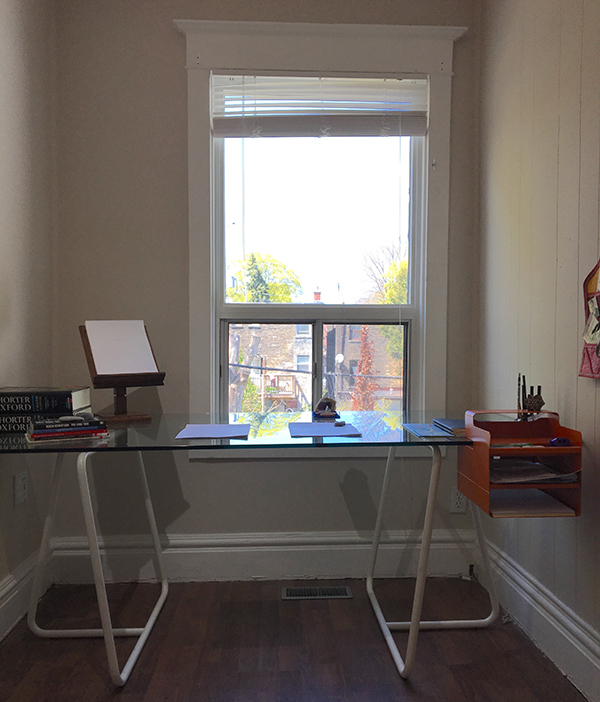 I wrote the first draft of “Laws of Motion” at this desk, this desk which has followed me from Virginia to Vermont to Toronto to California and back to Toronto, where I look forward to rejoining it this August. For the time being, I am in California again. Outside the window, lavender trumpet vine dances and dapples. The brightness of the day belies the darkness of recent times.

The protagonist of “Laws of Motion” is trapped by conflict, by age, by forces beyond her control, in a place where she does not feel at home. I wish the story’s subject matter was a thing of the past, an experience to be preserved in cautionary tales.

In the time between submission of the original version of this post and the day final copy was due, developments necessitated its updating.

Two men followed the jogger in a truck. They brought shotguns.

The two men thought the one looked suspicious. They watched him, in his khaki shorts and white T-shirt, his Nikes, jogging, and they decided he might be armed.

The pair drove after, cornered, and confronted the jogger. They shot and killed him.

Outside of that, nothing happened. Not for two months.

This story only makes sense when you fill in the colours of the man killed and the gunmen. For, if it were the reverse, others would likely have been killed. At the very least, there would have been immediate arrests and outrage. Waves of reverberating violence. Instead, over two months later, we are just learning about Ahmaud Arbery’s murder.

Between the original submission of this post and its re-submission, more black lives have been lost in North America as a result of rampant racism. The two more widely publicized, killed by American police: Breonna Taylor and George Floyd. The death of Regis Korchinski-Paquet remains under investigation in Toronto.

It is my fervent hope that our experience with Covid-19, while challenging, will not be without a silver lining. Travelers worldwide are now discovering what it is to be the subject of suspicion, a person from elsewhere, carrying who knows what on their bodies, in their bodies. A virus, the great leveler. Now, we are all suspect.

I hold out hope that we will emerge from this experience a bit wiser, that our time spent isolated and uncertain will give those of us in more protected positions reason to pause and consider what it is to be perpetually under question, and that, from this vulnerable position, we might find in ourselves more patience, empathy, and compassion for one other. 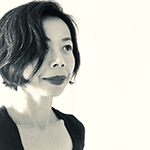 Barbara Tran is indebted to Hedgebrook for radical hospitality at a crucial time, and to the Canada Council for the Arts and the Ontario Arts Council for essential support. In 2020, Barbara’s writing will appear in Bennington Review, Canthius, Cincinnati Review, The New Quarterly, Ploughshares, and Poetry.

Photo by Holger Link on Unsplash