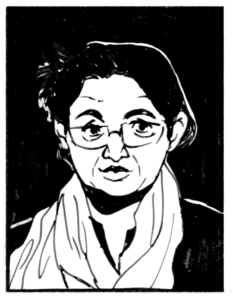 Traditionally, Pakistani girls get their ears pierced when they are babies. It is also a tradition that relatives give them a gift of earrings at this time.

My father was not keen on the idea. My grandmother and mother arranged to have my elder sisters’ ears pierced when they were babies, but my father convinced my mother to wait with me.

I was terrified. I would constantly ask my mother and grandmother about their ear piercings.

Why did you do it? How was it done? Did it hurt? Does it hurt now?

They told me that it looks beautiful and all girls do it.

I never will, I said.

But I didn’t care. I didn’t want the pain.

By the time I was fourteen all my relatives were insisting that I have my ears pierced.

“When will you do it? Will you have them pierced when you get married?” my sister asked, laughing.

The only person who didn’t insist I get my ears pierced was my father. He has always supported me and told everyone that I would do it when I felt comfortable.  But I continued to be terrified of the idea. If anyone brought it up, I would burst into tears.

One day during summer break, I was in the courtyard of our house. My two elder sisters were with me, talking and laughing. I was reading a book. My brother was playing outside with his friends. The weather was nice; it was cloudy and a cool breeze was blowing. My mother was preparing dinner in the kitchen. I remember the lovely smells of mutton curry and rice.  Soon, my father would come home from work so we could have dinner.

My brother came in and told my mother that the person who pierces ears was outside. This person would come by once in a while, asking if anyone wants to have their ears pierced. Today my sisters, my mothers, everyone started saying, yes, it’s a good time to have ears pierced.

“Who is getting their ears pierced?” I asked my mother.

All my siblings, some neighbors’ kids, and my younger brother’s friends all gathered around me like it was a circus and I was the clown.

But no one was listening to me. My elder sister grabbed my arm and said, “Let’s go.” Again my brother came and said that the ear piercing person was waiting.

“Tell him we are coming,” my mother said. She took my hand and said very sweetly. “Come, my lovely daughter.”

“No!” I shouted and ran into a room and hid under the bed. Everyone followed and for the next ten minutes they tried to convince me to come out. Finally, my eldest sister grabbed my leg and pulled me out. I was holding onto the bed but she pulled me out and they led me outside. My ears were pierced with a needle and thick black thread. It was not at all hygienic and it was very painful. They were all pleased because they had won. I was crying.

Two days later my grandmother gave me a pair of earrings. But the gift did not make me happy.

This isn’t the end of the story. Fifteen years later, a week before my wedding, my in-laws sent me a beautiful nose ring with a message attached. “It’s time to have your nose pierced.”